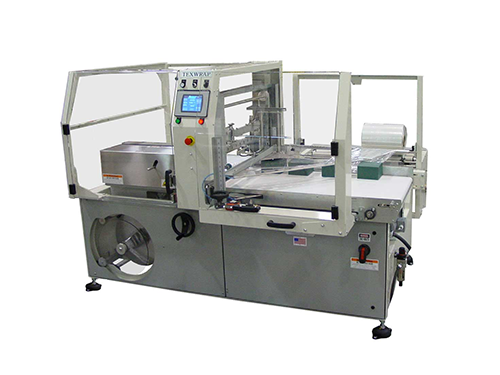 The 2010 is Texwrap’s offering for applications requiring the wrapping of products at moderate speed where product length or height exceeds the capacity of an L-sealer. The 2010 is flexible enough to wrap anything from a deck of cards to a bundle of wood flooring. The 2010 also has a big product handling capacity capable of wrapping products up to 10” high and up to 20” wide. With film/conveyor speeds of 100 feet per minute, the 2010 has plenty of speed to handle a variety of applications. The 2010 is also available in a larger version (model 2810) designed to seal even wider packages.

The 2010 is easy to use, rugged enough for constant operation, and comes standard with premium features not available on competitive models in this price range including low-mount film cradle, touchscreen library to easily recall package setups, and automatic dwell time compensator. The 100 FPM conveyor speeds and Texwrap’s exclusive Motion Trim technology, make this unit the fastest of its kind on the market today. Allen-Bradley controls, restricted service-level menus, and AC VFD drives make the 2010 as popular with maintenance staffs as with operators.

Get inspired. Begin your journey to packaging greatness today.